10 Years for the Hebrew University Bombing

Ten years ago today, on July 31st, 2002, Palestinian terrorists planted a devastating bomb in Hebrew University's Frank Sinatra Cafeteria. Numerous students and faculty were murdered in the attack, including several Americans. The attack was perpetrated by terrorists who had received funding, resources and safe haven from the Palestinian Authority (PA). Although the bomb maker, the arch-terrorist Abdullah Barghouti, was being hunted by Israel, he was hidden in a safe house by PA officials after they had released him from jail. The PA continued to assist Barghouti to remain free.

We brought suit against the PA and PLO for their role in aiding and abetting the Hebrew University cafeteria bombing. This month, we sought to take the deposition of Abdullah Barghouti who is serving multiple life sentences in an Israeli prison. After cursing at the other lawyers and myself, Barghouti refused to answer our questions, even after we had the Jerusalem Court order him to testify. Nonetheless, we decided to press on with the case against the Palestinian Authority and the PLO without Barghouti's testimony. Ten years after this heinous bombing, we still remember the victims and thePalestinian Authority's role in their tragic murders. We will continue to seek justice for the bombing's families and to hold the PA accountable, even as the United States continues to provide the latter with foreign aid. These are the names of those who were murdered: David Ladowski; LevinaShapira; Marla Bennett, Benjamin Blutstein; Dina Carter; Janis Coulter; David Gritz; Daphna Spruch; Revital Barashi. An additional one hundred were wounded in the attack, including many Israelis, Americans and South Koreans.
Posted by BCC at 5:56 PM

Writer who profiled Asma al-Assad claims she was duped

June 2012 statementfrom Vogue editor Anna Wintour (the magazine decided to take down its article on the Assads in spring 2011):
"Like many at the time, we were hopeful that the Assad regime would be open to a more progressive society. Subsequent to our interview, as the terrible events of the past year and a half unfolded in Syria, it became clear that its priorities and values were completely at odds with those of Vogue. The escalating atrocities in Syria are unconscionable and we deplore the actions of the Assad regime in the strongest possible terms."
July 2012 statement from Brown Lloyd James following disclosure in Al Aribayaof a memo on the firm's public-relations strategy regarding Joan Juliet Buck's Vogue interview:
"It is important for your readers to place our role in Syria in the proper context. We do not currently represent any Syrian interests. We have not set foot in the country since 2001. Our last recommendation was an unsolicited attempt to spare the country further bloodshed.
"Our limited work in Syria, which began with an American-sponsored project to bring together and educate children with disabilities, ended more than one year ago.
"We stand by our work in Syria, which occurred during a period of peace and optimism that Syria could be a constructive partner in the international community. We are profoundly saddened by the horrific violence taking place today. Our memo from over a year ago was volunteered as a last ditch attempt to tell the regime that it must listen to its people. Had that memo been heeded, Syria would be a much different place today. Alas, the regime chose to save itself rather than the country. We fully stand by the memo and our work."
Posted by BCC at 5:51 PM


Guri Weinberg who was one month old when his father, Moshe Weinberg and ten other Israeli athletes were tortured and murdered by Palestinian terrorists at the 1972 Munich Olympics speaks out against the IOC's (International Olympic Committee) 40-year refusal of a 1 Minute Moment of Silence. Guri speaks with Rabbi Abraham Cooper, SWC Associate Dean. Read Guri's op-ed here: Why the IOC will never memorialize the '72 Munich massacre. http://www.foxnews.com/opinion/2012/07/27/why-ioc-will-never-memorialize-72-m.... More at http://www.wiesenthal.com

"Now, I have a message to all the members of the IOC. The torture inflicted by “Black September” on the 11 Israeli athletes and their families took 48 hours. Your torture of the families and the memories of those esteemed athletes has lasted 40 years. I am not satisfied with a moment of silence in every Opening Ceremony of the Summer Games. Now I want all of you to lose your jobs and be replaced by real Olympians who care about the athletes and believe in the Olympic charter.The threat of the IOC coming after me does not scare me anymore. When you have no more dignity, you have nothing to lose. So, members of the IOC -- my name is Guri Weinberg and I am the son of Moshe Weinberg, the wrestling coach murdered at the 1972 Olympics. And I am not going away."-July 27, 2012 excerpt from FOX NEWS op-ed by Guri Weinberg, son of slain Israeli Olympian
Posted by BCC at 5:48 PM

Email ThisBlogThis!Share to TwitterShare to FacebookShare to Pinterest
Labels: Israeli athletes murdered at the Olympics in Munich, Moment of silence for the 40th anniversary of the Munich Olympics, Rabbi Abraham Cooper, SWC

SERAPHIC SECRET: An Analysis of the Presidential Candidates 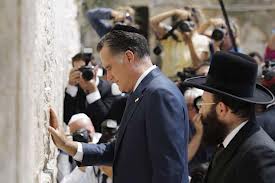 Mitt Romney went to the Kotel yesterday. It was quite a sight. But not an unusual one for a candidate running for the highest office in the land. Nor was all the pro Israel rhetoric that unusual - especially at a fundraising event in Jerusalem.  Watching all of this on the TV news last night has made me think about the upcoming Presidential election. I thought I would do a snap analysis of the candidates as they stand now and see whether either of them deserves my support.

I have come to the conclusion that where it matters the most to me – the security of the State of Israel and the overall welfare of the Jewish people, there is virtually no difference between them. Both President Barack Obama and former Governor Mitt Romney would be “good for the Jews”.

This may come as a shock to Obama haters and Romney supporters, but any fair analysis of the candidates cannot help but see them this way. A lot of the Jewish opposition to the President has been because of things that are not of any substantive value.

For example there is the fact that the President has not visited Israel… or the time he said that any treaty between Palestinians should be based on the pre 67 border lines …or his criticisms over Israel’s settlement polices … or the less than warm relationship with Israel’s prime  minister.

If one looks at these issues and measures them over substantive ones – like Israel’s security, Obama has a magnificent record – one that surpasses any of his predecessors.  He has helped fund Israel’s Iron Dome defense system over and above the foreign aid allocated to them.  He recently approved additional millions in foreign aid to Israel.  He has instituted the greatest level of intelligence co-operation in Israel’s history. Same thing is true about joint military exercises. Both are at unprecedented levels. He has also insisted that one of his most important foreign policy goals is preventing Iran from getting nuclear weapons.

That’s just a partial list of things he’s done to show his ‘unshakeable’ support for the State. I therefore do not buy the argument made by the anti Obama forces that President will put any more pressure on Israel after the election. If this is being anti Israel - I’ll take it!

What about his rhetoric with respect to Israel’s settlements policy? His statements hardly differ from policies the US has had in past administrations. Why pick on him? For example let us look at the pre 67 border statement. He didn’t say that Israel had to go back to the exact pre 67 borders. He said that there would be land swaps to accommodate “the facts on the ground”. Meaning that border areas like Maale Adumim would become annexed to Israel in exchange for unoccupied territories from Israel proper. I happen to believe that this is going to be the scenario in any peace treaty in the unlikely event that it should ever happen. I saw nothing wrong with that statement. He was merely stating the obvious.

Aside from some pro Israel rhetoric - I do not see Romney doing anything substantially different with respect to Israel or Iran than the President has.

So as it stands now - and for the first time in many years, Israel will not be the issue that will make the decision for me in the next election. I will instead be voting for who I think will do a better job for the economy.

Right now, after 3 and a half years in office - the economy is not doing  well. Far too many people are unemployed. Jobs are being created at a snail’s pace and the rate of jobs being created has actually been decreasing over the last two fiscal quarters.

Businesses aren’t hiring. They are being over taxed and over regulated which increases operational costs and tends to discourage production, and thereby hiring. His environmental policies have cost jobs too. In at least one case it has caused cancellation of a project (an oil pipeline from Canada) in the private sector that would have created jobs and helped stabilize oil prices.

Insecurity about the economy and jobs has caused something called “the paradox of thrift”. People are saving money for “a rainy day” rather than spending it. Demand for goods and services are therefore down which decreases production and jobs. Hence a stagnating economy.

All of the President’s stimulus plans have not worked. Spending money on government projects for purposes of jobs has not helped much. Except to increase the deficit. Which devalues our currency in the world and can only contribute to inflation. Oil prices are up…. causing transportation prices to go up … causing food prices to go up. One can call this stagflation!

Does that mean I support Romney? Not necessarily. Romney is something of an enigma to me. I have no clue what he would do to fix the economy. Generalizations like his successful experience in the private sector or that he will be more pro business are meaningless without details. I do not see any specifics to indicate how he will get the economy moving again. Right now it’s all talk.

The bottom line for me is that I have no endorsement yet. I am not happy with either candidate at the moment.  With Israel being off the table in this election for the reasons I stated above - unless I can be convinced that Romney’s plan for improving the economy  makes more sense than Obama’s policies – I remain undecided.
Posted by BCC at 5:30 PM