Children should be taught to love and respect, not to hate and kill

Email ThisBlogThis!Share to TwitterShare to FacebookShare to Pinterest
Labels: Children should be taught to love and respect, not to hate and kill

ELDER OF ZIYON: Not only Hamas: PA summer camps teach terror too


Many Palestinian children participated this summer in camps that promoted hate, terror, Martyrdom-death and denial of the existence of Israel. The camps were organized by the PLO Supreme Council for Sport and Youth Affairs and the PA's National Committee for Summer Camps, both of which are funded by the PA Budget. On its Facebook page, the National Committee for Summer Camps has listed itself as a "governmental organization." In Arabic it defines itself as "a governmental institution for children aged 6-12 years with recreational activities aimed to develop the Palestinian child in various fields."Among the "partners and supporters," listed on the website of the PA's National Committee for Summer Camps, are UNICEF and UNDP (accessed Aug. 30, 2017). 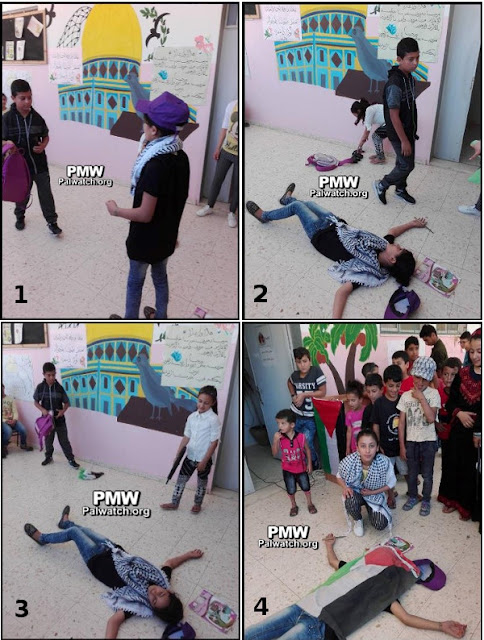 The first photo shows a girl wearing an Arab headdress and playing the part of a terrorist, as she faces off against a boy playing an Israeli. The second and third photos show the Palestinian girl "dead" on the ground with a knife in her hand after the "Israelis" who "shot" her standing next to her. The fourth photo shows a number of children standing behind the terrorist "Martyr" lying on the ground with a Palestinian flag draped over her, as is common practice at the funeral of "Martyrs."
[Facebook page of the National Committee for Summer Camps, Aug. 3, 2017]

These photos and others that PMW posted of play-acting terror attacks don't seem to be on the Facebook page of the National Committee for Summer Camps page any more, so there may have been some sensitivity about that after PMW reported it.But this shows that the PA is no different in teaching their kids to support and idolize terror than Hamas is. The world's embrace of the Palestinian Authority while considering Hamas a terror group is completely political and not based on their actions nor attitudes.
Posted by BCC at 10:31 AM

ELDER OF ZION: Everyday antisemitism in 1936 German letter to US 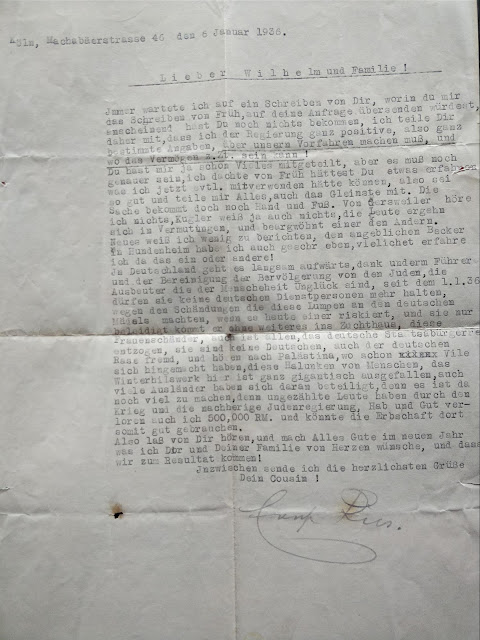 Mike Shaughnessy, professor of German at Washington & Jefferson College, translated a letter written one Ernst from Cologne, to his cousin in Pittsburgh, U.S.A. Sent in 1936—after Hitler's rise to power, but before World War II and the Holocaust—it refers glibly and approvingly to the removal of Jews from civil life, even as it reflects the anxieties and growing paranoia of life under fascist government.


Köln, Machabäerstrasse 46. January 6, 1936.Dear Wilhelm and Family!I’ve been waiting a while to get a letter from you in which you would send me the letter from Mr. Früh about your inquiry. Apparently you haven’t received anything, so I’ll inform you that I’ve had to give the government very positive, specific details about our ancestry and where our assets are currently....Things in Germany are looking up thanks to our Führer and the cleansing of the population from the Jews (Those exploiters who are the misfortune of humanity). Since 1/1/1936, they can’t employ Germans as their service personnel, because of the desecration that those good-for-nothings did on the German girls. If one of them even dares nowadays, even if they just insult a girl, they will be put in prison straightaway --those rapists. In addition, German citizenship was revoked for all of them, they are not Germans -- foreign to the German race, and should be sent to Palestine where a lot already ran off to, those bastards.The winter relief fund was a great success and even a lot of foreigners took part. A lot still needs to be done, because countless people have lost their belongings due to the war and the government run by Jews afterwards. I also lost 500,000 Reichsmark and could therefore make good use of the inheritance.Well then, I look forward to hearing from you and I wish you and your family a good new year from the bottom of my heart, and hope we resolve the issue soon.In the meantime I send you heartfelt greetings,Your Cousin,Ernst Ries

This is more chilling than reading Mein Kampf or propaganda by Goebbels. This is just an ordinary person who is filled with pure, ordinary hate for Jews, and he is quite at peace with himself for it.It would be nice to pretend that this particular type of hate is no more.(h/t Ronald)
Posted by BCC at 10:29 AM