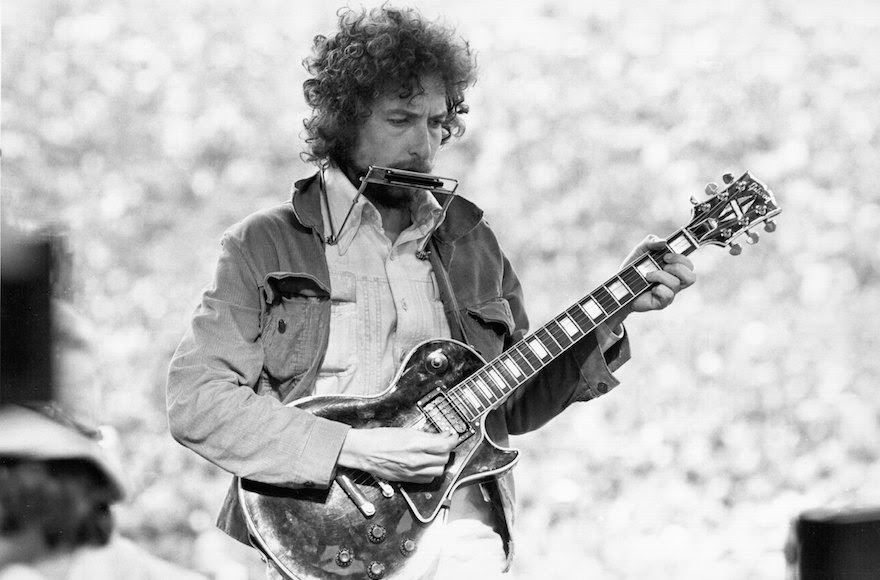 Dylan’s Jewishness has been examined and reexamined over the years, relatively little attention has been paid to his 1983 song “Neighborhood Bully” — a rare declaration of full-throated Israel support by a mainstream American rocker.
The lyrics equate Israel with an “exiled man,” who is unjustly labeled a bully for fending off constant attacks by his neighbors.

Photos of Jerusalem from the 19th century sell for $1.4 Million

A collection of pictures of Jerusalem and other places in Israel from the 19th century has been sold for $1.4 million the British newspaper The Daily Mail reports.
The collection consists of over 1,000 black and white photos, the earliest of which are from 1840.
The photo set includes pictures of Mt. Zion, al-Aqsa Mosqe, and the Jewish cemetery on the Mount of Olives. The photos are amongst the oldest photos of Jerusalem ever captured.

Jews and Arabs appear in the pictures, and shows people praying in mosques, at the Western Wall, and at other holy sites.
The collector, who’s name hasn’t been released, collected the photos over a quarter century in order to create a special historical record of the city.

The collection was sold at auction at Sothebey’s. The starting price was under $500,000, but the winner of the auction bought the collection for $1.4 million.

Richard Patorini, an expert at Sotheby’s described the sale as “one of the most unforgettable sales” that he was involved in.
“It arrived at its high price because those who were involved in the bidding understood that there were great treasures amongst these pictures. More pictures are taken every two minutes than were taken in the 19th century,” he said.

Email ThisBlogThis!Share to TwitterShare to FacebookShare to Pinterest
Labels: Vintage photos of Israel

On Wednesday night May 14th a gathering was held for the Shloshim of HaRav HaGaon Henoch Leibowitz ztl at Cong Shaarey Zedek in the San Fernando Valley, home to the Valley Torah High School and Beis Medrash Ner Aryeh, institutions led by and taught by talmidim of HaRav Henoch and the Chofetz Chaim Yeshivah.  Baale Batim of the Los Angeles community came from all parts of the city to remember this Gadol who touched their lives, some directly and others, indirectly. After davening Minchah, the evening began with the recitation of Tehillim lead by Rav Zvi Block, mara d'asra of Toras Hashem and Rav Shelaim Furst of Beis Medrash Ohr Simcha.

Rabbi Jonathan Rosenberg, Morah D’asrah, Congregation Shaarei Tzedek
Rabbi Rosenberg addressed: the Shalsheles Hamesorah of Slabodkah
(photo credit Rabbi Aryeh Striks)
---------------------------------------
Rabbi Baruch Cohen Esq., a prominent attorney and talmid of the Chofetz Chaim Yeshivah, was the M.C. for the evening. Rabbi Cohen expressed his feeling of closeness to the Rosh Yeshiva even after leaving the yeshiva and living so far away.

Baruch C. Cohen, Esq., MC
(photo credit Rabbi Aryeh Striks)
MC: Good evening. My name is Baruch Cohen, and I proudly learned in the Chofetz Chaim Bais Medrash for 6 years, from 1980-1985. I considered the RH to be my rebbi and would have torn kriah had I been at the Levayah, had I not been in transit to EY. And eventhough I am a trial attorney by profession, I have always taken the RH’s directives to heart, that no matter what I do in life, I must always remember that I’m also a Marbitz Torah and an ambassador of Torah values. This ideal has carried me throughout my professional career. It occurred to me that in all of my years of public speaking and as a trial attorney, I never had the privilege of speaking publicly before the RH. And tonight, well, this as close as I’ll ever get. And I want to personally thank the RH, for the time that he visited us in the hospital, and of the warm chizuk that he gave us. I was hurting something awful, and the RH came to give encouragement to his student. Chazal say that Yosef HaTzaddik prevailed in his great test, because a vision of his father Yaakov Avinu appeared before him at the decisive moment and gave him the strength to overcome temptation. Tonight, our speakers will give you 'the vision''of the face of a Godol BeYiroel, a portrait of the RH. I recently encountered an emotionally painful moment, where my reaction to the trauma would have impacted greatly on whether there would be Simcha or whether there would be sadness. People’s sensitivities were at play. I was fortunate, that at that nanosecond of indecision prior to my reaction, I asked myself: “What would the RH do if he were here?” And I believe that it is a tremendous zchus to the RH that I was able to invoke his holy image at that decisive moment and spare everyone from unspeakable Agmas Nefesh and emotional turmoil. In fact, my reaction, I believe, became a source of Simcha. Tonight’s Sheloshim is marked by the presence of the Rebbetzin, and of the RH Rabbi Akiva Grunblatt, and of the RH's secretary Shimon Ishal, and we thank you all for traveling from NY to be with us today. Everyone of our excellent speakers tonight, will touch upon different nuances of the greatness of the RH.
---------------------------------------
Baruch Cohen He went on to introduced HaRav Akiva Grunblatt, one of the two  Roshei Yeshivah of Yeshivas Chofetz Chaim of Queens, NY, who had made the special trip to Los Angeles to take part in this gathering. He described how a Rebbi is such a crucial influence and how, when he is no longer with us, the loss of his influence has such tremendous impact.

Rabbi Yitzchok Summers, Morah D’asrah, Congregation Anshe Emes
The RH never physically fathered a child. Yet, he considered his Talmidim, his children.
Rabbi Summers thanked the Rebbetzin for all that she did for the Rosh Yeshivah, and addressed what it meant to be the RY's son
(photo credit Rabbi Aryeh Striks)
---------------------------------------
Rabbi Yochanan Weiner, a Rosh Yeshivah of Beis Medrash Ner Aryeh and also a student of the Yeshivas Chofetz Chaim, told the olam how the influence of the Rosh Yeshivah molded him into the Rebbi he has become.

Rabbi Avrohom Stulburger, Rosh Yeshiva Valley Torah Center & Bais Medrash Ner Aryeh
Seeing Rabbi Stulberger interact with the RH, was a lesson, and a Mussar Shmuez, in and of itself, on how a Talmid must respect and love his Rebbi. And that respect cut both ways. RabbiStulberger’s constant invocation of the RH and his ideals made it seem that the RH was Rabbi Stulberger’s partner in the creation of VTHS and BMNA (even though the RH was not here in LA but on the other side of the country). So much of the RH can be seen in Rabbi Stulberger. So much of the RH’s sterling Middos and feinkeit, can be seen in his Talmid, Rabbi Stulberger. RabbiStulberger addressed his observations as to the RH’s ability to cloak his greatness and to appear so normal, making him accessible to everyone
(photo credit Rabbi Aryeh Striks)
Bilah HaMoves Lanetzach, Umacha Hashem Elokim Dimah Meyal Kol Ponim
May He swallow up death forever; may Hashem God wipe away tears from every face
(Isaiah 25:8)
---------------------------------------
In speaking of the Rosh Yeshivah, Rabbi Schwartz of Chofetz Chaim said, “The rosh Yeshivah is irreplaceable. It’s the combination of his warm personality, his level of Torah erudition, and his ability to develop students. He also represented a connection to the previous generation of Gedolim.”  As the olam began to got up to leave, I was overcome with emotion. The realization set in: The Yeshivah world has lost another one of its Gedolim, Harav HaGaon Alter Henoch Leibowitz, zt”l. In truth, we hear cries of anguish and sadness from many communities around the world, recognition that we have experienced a loss that does not end with the yeshivah world alone.  There was a time when our bond to the precious previous  generation was like a shalsheles of barzel, a chain of steel: Gedolei Torah, Rabbanim, Rebbeim, Roshei Yeshiva, Dayanim. But the ranks are thinning. The chain is more like a collection of barely-connected strands. Or so it seems. But Harav HaGaon Alter Henoch Leibowitz, zt”l, was different. He managed to link his chain to thousands of talmidim and baale batim, each and everyone feeling that he had a special bond with the Rosh Yeshivah. He had been described as "one of the last great Roshei Yeshivah and baalei mussar of the previous generation."  HaRav HaGaon HenochLeibowitz, zt”l, was a Rosh Yeshivah whose influence extended beyond his talmidim and overflowed into the various Jewish communities around the world. The Los Angeles community, those who knew him and those who only knew of him, came to express their acknowledgement of the loss of one of our great Roshei Yeshivah, a Gadol whose influence touched so many people and so many communities. Yehi Zichro Baruch. By Rabbi Arye D. Gordon