Ground Zero Imam: 'We Have More Of A Right To Moses' 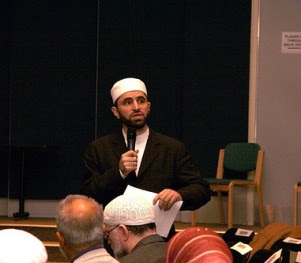 New York - Muslims have “more of a right” than Jews to the biblical prophet Moses, declared the imam who has become the new face of the proposed Islamic cultural center near Ground Zero in New York City.
Imam Abdallah Adhami also urged Muslims to “compete” with other religions.
“We must be doing it first, we must compete with you to be doing more of that. We want to fast Ashura too, because that’s the day God saved Moses; that is certainly a day to be celebrated. We have more right to Moses,” stated Adhami in a 2008 lecture obtained and reviewed by WND.
Ashura is an Islamic fast day that commemorates Muslim events, including the Islamic claim that Moses fasted on that day to express gratitude to God for liberating the Israelites from Egypt.
In his lecture, Adhami recounted the Islamic story of the Muslim figure Muhammad arriving in Medina, where he encountered Jews who fasted on Ashura and asked them why they were celebrating the holiday.
Posted by BCC at 7:26 AM