'You Can't be an Occupier in Your Own Home' In candid TV interview, Bayit Yehudi head says the lesson from world inaction on Syria is that Israel can only trust G-d and its own might. 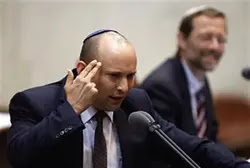 Economy Minister Naftali Bennett (Bayit Yehudi) reassured the public on Monday that in his opinion, the citizens of Israel will not come under any attack from Syria, and explained why he is firmly against the establishment of a "Palestinian State" in Judea and Samaria.
Speaking on the KnessetChannel, he said that Israelis could go on living their lives' normally and even noted, when asked, that his family has not renewed its supply of gas masks yet.
Asked if he was disappointed by US President Barack Obama's decision to hold off on attacking Syria until Congress debates the idea, he said that he does not want to give advice to the US President. He added, however, that "Israeli citizens have to be realistic and know that at the end of the day, 'If I am not for myself – who will be for me?' [a Talmudic adage in favor of self-reliance – ed.]. If we do not take care of our own security, no one else will. Look at how the entire world is reacting to the murder of 1,000 children with gas."
“All things told,” he said, “the world is stuttering. And on the day of truth we can only depend on ourselves. Not international guarantees, no relying on agreements – in the end, our strength, which comes from our hold upon the Land and our belief in the Land, [and] the IDF where I still serve in the reserves and am proud of it – that is what will keep us alive here.”
"We have to look at what is happening and internalize the lessons,” he explained. “In the moment of truth, the world will not be with us. The people who now want to hand over Judea and Samaria in exchange for guarantees from the world, should see what is happening. The world turns its back.”
Similar comments have been made by a number of Israeli politicians in the past few days, as the perceived dithering of the Obama administration is watched carefully by friend and foe alike, splitting Arab opinion and provoking ridicule from the Syrian regime and its allies.
Asked whom we can trust, Bennett said – “first of all, we have G-d, but also our own strength. We will not depend on the world anymore. We will not! Seventy years ago, when we hoped that the world would be there, they were not. No one was," he said, in a reference to the failure by the Allies to bomb Nazi extermination camps during the Holocaust.
"We are not occupiers"
In a wide-ranging 30-minute interview with Nehama Duek, Bennett firmly rebuffed her contention that Israel is an occupying power in Judea and Samaria.
“We are not occupiers. You cannot be an occupier in your own home. Internalize this, Nehama. We are not controlling them, they have been ruling themselves for a long time.”
“In Lebanon, in Syria, in Egypt, everything is in chaos. The only stable place is here, in our land. We have stability and quiet thanks to the IDF, from the fact that we are present in Judea and Samaria and that we live there. The same geniuses who told us that if we give Syria the Golan Heights we will have peace, are now telling us that we have to hand over Judea and Samaria. I don't accept this."
When Bennett described his proposal for applying Israeli sovereignty on parts of Judea and Samaria – Duek protested that the Palestinians want a state.
“Okay,” he said. “And I want to live. What takes precedence? My will to live? My wanting that my four children survive – or their will to have a state and an army that will annihilate me? What can I do? Even though they'd really love to annihilate me, they have no partner in this. I have this bug in my system – I love to live in my country."
During the interview, Bennett spoke about national unity, saying that part of his political mission is to unite different streams in the nation, and “to lower tensions.”
On August 22, Bennett had a similar message for the public regarding the Syria gas attack:
“Seventy years ago, when they annihilated children and babies, the world was silent,” he wrote. “The internet and television stations are not moving the world out of its complacency. Images of mass graves and piles of children cannot pass in silence.”
"A child is a child is a child,” he stated. “And don't tell me '[it's just] Arabs killing Arabs.' I will not be silent.”
Posted by BCC at 7:40 AM